He grew up at Forest Hill, his father was a worker. Arthur married in 1942 with Irene Smith.

After the crash Arthur managed to jump out of the plane but unfortunately he got strangled with his own parachute ropes. The next day he got found dead in a tree at Singraven and was buried a day later with his companions.

Remembered with a memorialstone at the St Bartholomew’s church at Sydenham.

Text on grave: ‘He died not in vain so peace will once more reign.’ 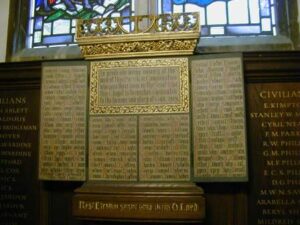