Reginald was the oldest of three children, he grew up in Vancouver. His parents were from England, they emigrated to Canada in 1920.

In September 1939 he joined the Royal Canadian Air Force and followed his basic training in Vancouver. His training to become Flying Officer was in Patricia Bay. In December 1942 he left for England where, in October 1943, he joined the 406e squadron in Manston, Kent.

During his service in England he often come to visit his grandfather Arthur Bleay. His cousins were always looking forward to  the visit because he always brought a box of Wriggle’s Chewing gum with him.

Awarded with the Canadian Volunteer Service Medal with Clasp, the Defence Medal, the War Medal, the 1939-1945 Star, the Europe Star and the France-Germany Star.

Text on grave: ‘To live in the hearts of the ones we love is not to die.’ 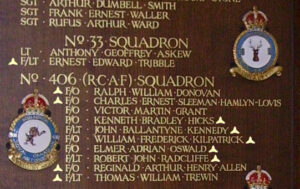