Doug grew up at their farm in Riverside, his mother past away a month after his birth. His father remarried Elizabeth Jane Marks and they had six more children together. The Dyment family had multiple factories in Toronto and the United States. Doug became a head at one of the factories.

In August 1941 he joined the Royal Canadian Air Force. He completed his basic training in Rivers. In October 1942 he left for England. Early 1943 he was stationed with the 22e Operational Training Unit at Wellesbourne, Warwickshire. From March 1943 he was part of het 428e squadron at Dalton.

His brother Bill came to visit his grave in Deurningen multiple times.

Text on grave: ‘He died to keep us free. May he rest peacefully.’ 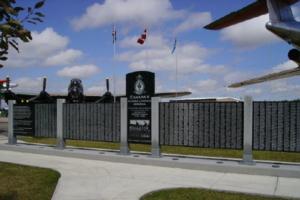