He came in September 1941 as farmers servant to the Sanderman family at ‘erve Leuvelt’ Hasselo no. 5, municipality Weerselo. Here lived previously Erich Marcuse.

He was the second of a family with three children. He came to the Netherlands from Turin in November 1938. He was a Palestine-pioneer from the agricultural training center de Wieringermeer. His older brother Yochanan (Hans) also stayed here. After the closure of the work village, both joined the Deventer Association, as did his later wife Ruth. Shortly afterwards, Kurt Erich arrived in Hasselo.

Kurt Erich married on 11-08-1942 in Weerselo with Ruth Sara Liemann from Berlin. His parents could not give consent because they already were missing. By order of Justice Almelo granted dispensation of promulgation and wait. Witnesses at the wedding were father and son Sanderman. After their marriage Kurt Erich and Ruth moved to Amsterdam. Together they had two children, Rudi Max (Reuven) en Kurt Erich jr. The youngest was born in 1944 at the hiding place of Ruth. Son Reuven was placed as a 9-month-old baby via the underground with Cornelis and Isabella Pouwer-Ganzevoort in Arnhem. After the war he was picked up by his mother. This was a traumatic event for him and his foster parents. His mother remarried shortly after the war, Reuven was later left with his uncle Hans as a ‘difficult’ baby and later adopted by him. Reuven visited Weerselo in January 2018.

Kurt Erich was arrested in Amsterdam and arrived on August 26 1943 in Westerbork transit camp – prison camp 67. He was deported on August 31 at the Auschwitz concentration camp. His death certificate was drawn up in 1951 in Weerselo.

Holocaust victim, as well as his parents. His wife, children Rudi Max and Kurt Erich jr. and his brother Hans and sister Eva survived the war. His brother Hans survived Bergen-Belsen and Eva had left for England with the last children’s transport. His eldest son Reuven grew up in the family of his uncle Hans, he visited Weerselo in January 2018.

Memorial for the victims of the Nazi regime in Wuppertal. 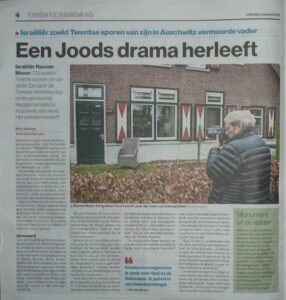