Geert was a commies and resistance fighter. During the battle for the Grebbeberg he was a sergeant with the Genie Liaison Service. After the capitulation of the Dutch army he was appointed as border commissioner at Glanerbrug. In January 1941 he met Johannes ter Horst here, who was already fully involved in the resistance work. Geert, nicknamed Rooie Geert, also became involved in the resistance, first helping French prisoners of war who had fled from Germany, later also Jews and shot Allied pilots. This in collaboration with Johannes ter Horst and Jules Haeck. At the beginning of October 1942 he was transferred to Zundert. In December 1943 he was transferred again to Twente and settled with his fiancée Bertha. They lived at the Hölterhof at the Hölterhofweg 327 in Enschede, both played an important role in the resistance.

Geert continued his resistance as a member of the Knokploeg Enschede, of which Johannes ter Horst was the leader. Their resistance group carried out more than 50 armed actions, in which no one was arrested or killed. Geert Schoonman was actively involved in the liberation of, among others, Frits de Zwerver from the Koepelgevangenis in Arnhem on 11 May 1944 and the liberation of 54 prisoners from the House of Detention in Arnhem on 11 June 1944. He also took part in the liberation of two people sentenced to death – including resistance fighter Piet van Dijk Jr. – from the House of Detention in Almelo on March 22, 1944. When Johannes was put in charge of the Knokpoegen of Oost-Twente in June 1944, Geert succeeded him as leader of the KP- Enschede. In September 1944 he carried out a number of railway attacks. Johannes ter Horst was arrested on September 22, 1944 and the next day by S.D. Chief Schöber shot dead. They were inseparable until their death. After his death a reorganization took place and Geert was put in charge of the drop-off areas in the east of the Netherlands. He was directly involved in three weapon drops.

Geert was arrested on 6 October 1944 when he stayed as a drop-off inspector at farmer Evers ‘de Paus’ in Hezingen. The Menco family from Almelo in hiding was also present. Father Menco was shot dead with his three sons at the foot of the Kuiperberg. Mother and daughter were taken away, they were never heard from again. At that time, Chiel Ploeger, a member of the Twentse Knokploeg, was also in hiding on the farm. He was hidden in the hayloft and was overlooked by the land guards. He had previously narrowly escaped death in the raid on Huize Lidwina. A few weeks later he was arrested in Luttenberg and executed in a retaliatory action on the Woeste Hoeve. Geert and Bernard Evers, who were arrested at the same time, were shot at during their escape attempt and transported to hospital with injuries. A liberation action by the resistance failed.

On 11 October they were taken from the hospital to the prison bunker at Twente airport, where they were subjected to a torturous interrogation. Geert was executed together with Bernard Evers on 12-10-1944 behind this bunker. They were thrown into a bomb crater near the bunker that was partially filled in. It was not until three years later, in October 1947, that his remains – and that of eleven other prisoners, including Bernard Evers – were taken on the instructions of the imprisoned S.D. Chief Schöber found. His parents received his three gold rings, including his engagement ring.

At the request of his father, the death was registered in Weerselo by a decision of the court in Almelo. The part of the airport where he was found then belonged to the municipality of Weerselo.

Geert was buried with great interest on November 1, 1947 at the General Cemetery in Zaandam. Many Twentse resistance members and the Evers family were also present. The funeral service was led by the Reverend Slomp, alias ‘Frits de Zwerver’, who was liberated by Geert from Arnhem.

Reburied: National Field of Honor in Loenen, section C no. 241. 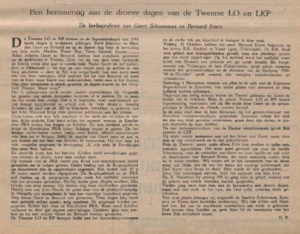 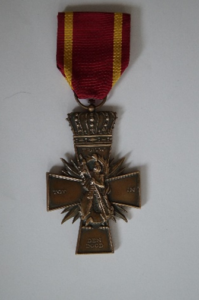