Colin and his brother Paul grew up in Ceylon, where their father owned a big teaplantation. Both were send to a  typical  boarding school in England, after some years the parents also came to England. They lived at an estate in Old Heathfield. After his brother Paul became a merchantofficer, Colin often visited Betty, who was the financee  from Paul.

At the beginning of the war they were both in the military. Paul got after some time on the staff of Field Marshal Montgomery. Colin was a pilot in the Royal Air Force. Colin and his men carried out several flights over Nazi Germany, including to Bremen, Hannover and Berlin in October 1940. This flight was  almost fatal for them, they were shot and with difficulty managed to achieve the English seaside.

Paul and his family visited his grave in 1998, where they left their address and letters with drawings of their children. Then there was contact with the plans for a further visit in 2001, in which the letters should be placed in Colin’s grave. In July 2000, Paul suddenly deceased. His widow, Betty excuted their promise and posted on November 11, 2000 a box with the letters in his grave, exactly 60 years after the funeral. 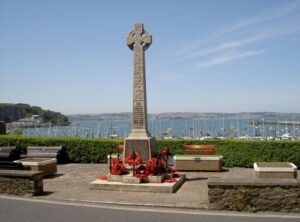