He grew up with his sister in Lawnswood. His father worked at the ‘E.C. Midgey Footware Factory’ of grandfather Midley in Leeds. In this factory the made thousands of army boots. He passed away in 1928. Ellis worked as a Managing director in this shoe factory.

Ellis started his service in 1940.

This was the first time he flew with this crew. He had to fill in for a permanent member of the crew, Adam, who was sick. He tried to change this, but his request was turned down.

Remembered at familygrave at Lawnswood.

Text on grave: ‘At the going down of the sun and in the morning we will remember them.’ 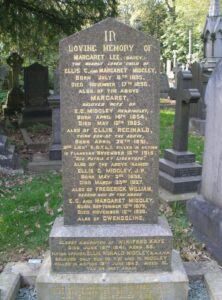