William was the son off a Dutch father from Hillegom who married in England. He grew up in a family of seven children.

Based on his servicenumber he joined the army in September 1939 at the RAF base Uxbridge.

He was the only one who survived the crash at Noord Deurningen, was taken as a prisoner of war and got deported to a prisoncamp in Greifswald ( North Germany, the eastsea). At the end of March the family received a postcard with the request to send some warm socks and a sweater. After they send the second package they received the message that William past away on the fourth of May. According to German sayings he died of a local diphtheria. The family received photos of the funeral. The pictures only made the loss worse and they were considered as German propaganda.

William was buried at Greifswald. He later on got reburied at the warcementery 1940-1945 at Berlin-Charlottenburg, grave 2.H.20

Text on grave: ‘We remember with love en honour he who laid down his life for us.’ 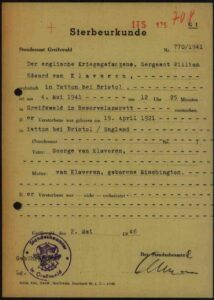