Frank grew up in Toronto. His father was in 1913, emigrated from Italy to Canada. His mother was an English widow with five children. Her husband had died in the First World War. Frank and his brother Ross were born from the marriage with Romolo. His mother died in 1933, after which his father later on moved with the children to Montreal. Frank was machine operator.

He came into service in February 1942 and landed in Normandy in July 1944.
In October 1944 after the liberation of Boxtel he met a Dutch girl, with whom he had serious plans.

On April 12, 1945 after a winning fight near the German Sögel the regiment was moving on, when Frank found an abandoned Schmeisser MG. He grabbed the machine gun to throw it away, and with taking the gun it went off. Frank was hit in the face and seriously injured taken to the Canadian Military Hospital in Ootmarsum, where he died.

Awarded with the Canadian Volunteer Service Medal with Clasp, the Defence Medal, the War Medal, the 1939-1945 Star, the France-Germany Star and the  Good Conduct Service Chevron.

Text on grave: ‘A dear son, ever lovingly remembered by his dad and Ross.’ 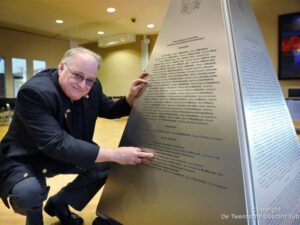 His halfbrother Eric at the memorial in Denekamp 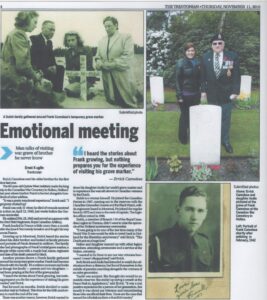