Buried on May 15 at the R.K. Begraafplaats in Rossum.

There was claimed that one member of the crew tried to jump out of the plane. Unfortunately the aircraft was to low and he got killed during his attempt.

They had previously dropped their bomb load, whereby an air torpedo ended up at the Koppelboer in Zuid Berghuizen. This caused a tremendous explosion. All windows in the wide area were broken, fortunately no personal accidents occurred.

All RAF bombing aircraft en reconnaisance fligts had a pigeon on board. When something happened the pigeon got released and was sent back homebase with important information. The resistance, who arrived shortly after tried to  sent the pigeon but the pigeon got shot by the Germans.

Gerard Voorpostel was 14 years old when he saw the crash on a distance. He collected parts of the dome window of the aircraft, cut them into pieces and made a rosary of it, which also is blessed by a priest.

A window at the St. Mary’s Church at Shirehampton, donated by the Beachem Family, remembers the entire crew of the AVRO Lancaster. 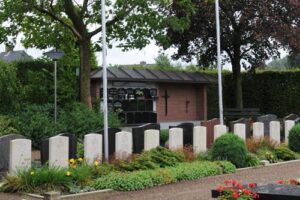 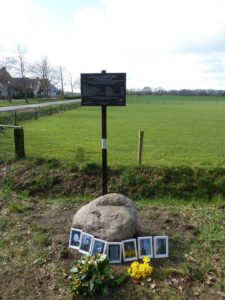 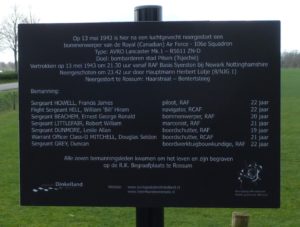