He came from Voorst in May 1938 as a farmhand to the family ten Kate, Deurningen No. 17.

David was a Palestine-pioneer from the Deventer Association. In March 1939 he went to his father in Amsterdam, his mother died in 1921. He worked as a gardener at the Vondelhof in Amsterdam. In November 1939 here 70 youths were accommodated through the Foundation for Immigration and Education of Children in Palestine, the youth aliyah. These were Jewish children from Nazi Germany who had ended up as refugees here.

He married Marcella de Vries in March 1942 and lived with her in Wilp nr. H 71, municipality Voorst.

They were arrested on their flight to the south and arrived in camp Mechelen. They were deported to the concentration camp Auschwitz on September 1, 1942, where Marcella shortly after arrival was killed.

Holocaust victim, as well as his wife, his father, stepmother Lena Hoofiën and his brothers Abraham and Jacob. His brothers Isaac and Frederick survived the war and went back to Israel.

Memorial at the Jewish Cemetery in Zutphen. 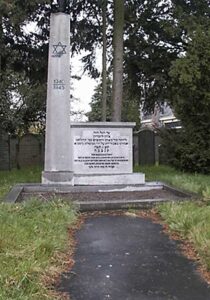