In June 1939 he came as a farmer’s apprentice with the Sanderman family at the Leuvelt farm in Hasselo no. 5, town of Weerselo. Later Kurt Erich Moser also lived here. In April 1940 he left for Renkum.

In November 1939 he left for Renkum. In 1943 he was in the Central Jewish Insane asylum the Apeldoornsche Bos at the Zutphensestraat 106 in Apeldoorn. He was probably one of the many Jewish volunteers, who came forward here after it was forced by the Nazis in 1942 to dismiss all non-Jewish employees.

On January 22, 1943 over 1000 people were deported from here, including Erich. On Sunday, January 24th they arrived at the death camp Auschwitz II-Birkenau. No one has survived this transport.

Memorial for the Victims of the Apeldoornsche Bos at Apeldoorn. 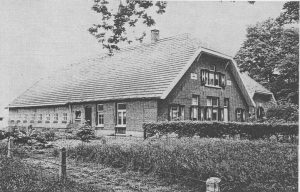