She came from a family with six children. In 1924 she left as a shop assistant to Leeuwarden, where her father’s family had a drapery business. She then worked as a shop assistant at the Rhee company in Hengelo (Ov.). The family lived at 37 Dennenboschweg in Hengelo (Ov). Her father died in 1926. After her marriage in 1942 she lived with her husband at 8 Vordenseweg in Hengelo, Gelderland, the birthplace of her husband. He was a cattle dealer. They had no children.

Jeanette went into hiding with her husband and two others with the Smienk family at 18 Spinnersweg in Hengelo. They were betrayed and on September 7, 1944, in a raid by the S.D. arrested. Her husband came to the hospital, tipsy, from which he managed to escape. Jeanette, Herman van Coevorden and Eduard Denneboom were transferred to Twente airport where they, along with three other Jewish people in hiding, were executed and buried on 27 September.

It was not until three years later, in October 1947, that her remains – along with those of eleven other prisoners – were taken on the instructions of the imprisoned S.D. Chief Schöber was found near the bunkers on the Weerselose part of the airport.

Holocaust victim, as well as her mother, the brothers Levi and Jacob who still live at home and her sister Johanna. Her husband and her brothers Max and Abraham and survived the war. One brother of Jacob’s family died, two sisters survived the war. Her husband remarried after the war to Clara van Leeuwen, widow of Meijer Roet and mother of a daughter. Together they had two more children. 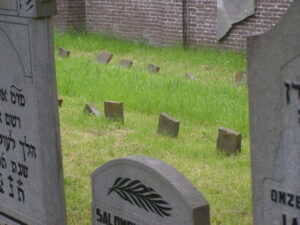