Jules lived in Hengelo since 1918, first as a boarder with the Sietse Dekema family. In 1925, together with Dekema, he started the company S. Dekema & J. Haeck, a wholesaler in fruit and vegetables at 49 Nieuwstraat. It existed until 1931. He met Manie Jelten at the family of the Dekema’s. In September 1933 they moved together to 120 Parkstraat in Arnhem, where twins René and Iréne were born in January 1934. They decided not to marry, but to go through life together as partners. Since November 1934, the family lived again in Hengelo at 115 Berfeloweg, where Jules started a wholesale business in fruit and vegetables. By the way, it was completely destroyed by the bombing of 7 October 1944.

He was the leader of the Haeck pilot line. As early as 1941, he was called upon to take in an escaped French prisoner of war. Jules, originally from France, naturally mastered this language like no other. His family lived in France. Jules deserted from the French army at the end of the First World War and left for Belgium. Then he had already lent a helping hand to escaped prisoners and he decided to do it again. Haeck’s organization managed to channel dozens of escaped French prisoners of war and Allied airmen in a southerly direction. The route led, among other things, past Zutphen and Nijmegen to end in Echt via Roermond. some indispensable members of his organization were the distribution official Fons Gerard and the Bornse municipal official Piet van Dijk Jr. These people were able to provide voucher cards for the people in hiding, among other things. Their position also enabled them to organize the necessary paperwork. Haeck operated completely independently with his group. Jan Hendrik Jelten, Manie’s brother, was also involved in the pilot line.

Jules did maintain contacts with the organization of captain Evert Lancker. It is believed that Ria Hermans, Lancker’s fiancée, mentioned his name after her arrest under great pressure. In the early morning of October 4, 1944, two robbery trucks stopped at the Berfeloweg and S.D. men stormed into the house. He tried to escape through the roof, but was shot in the arm by an S.D. and realized that a further attempt to escape was futile.

Jules was arrested, after heavy interrogations he was executed on 7 October 1944 and buried behind a bunker at Twente airport, together with Gerrit Hulsbeek. It was not until three years later, in October 1947, that his remains – along with those of eleven other prisoners – were taken on the instructions of the captured S.D. Chief Schöber was found near the bunkers on the Weerselose part of the airport.

Posthumously awarded the Bronze Lion, the resistance commemorative cross and the US government’s ‘Medal of Freedom with Silver Palm’.

In Hengelo, Jules Haeckstraat was named after him.

War Memorial in Hengelo and Provincial Monument in Markelo. 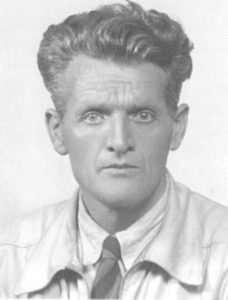 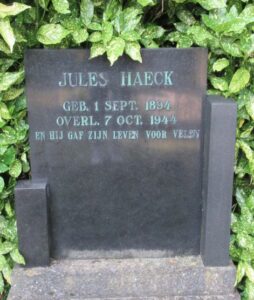